Latrell Mitchell’s dad has shared the exact moment his son knew he wanted to be a Bunnie.

Matt Mitchell told NRL.com that it was a conversation with South-Sydney coach Wayne Bennett that ultimately got the 22-year-old over the line to sign on a one-year deal.

Stream over 50 sports live & anytime on your TV or favourite device with KAYO SPORTS. The biggest Aussie sports and the best from overseas. Just $25/month. No lock-in contract. Get your 14 day free trial >

“As soon as he met with the super coach that was it I think,” Matt said.

“Wayne Bennett said, ‘mate, I’ve got room for you here and I’d love to coach you’. He told Trell that there was no pressure and he was straight up with him and said that they didn’t have the money that the Wests Tigers were offering but wanted him at the club.

“They had a good yarn and he left feeling wanted. That’s when I think he made his decision.”

Latrell was also wooed by powerful Rabbitohs co-owner Russell Crowe, but when he met Crowe at his Nana Glen farm they didn’t speak a word of footy.

Instead the pair bonded over similar family values.

“He [Crowe] is one of the most placid men I’ve met in a long time. For a Hollywood superstar he’s a real down to earth fulla,” Matt said.

“He didn’t even talk about football, Russell just showed us around the farm. He said to us football can only get you so far and if this is what you want and what you’re passionate about then work towards it. 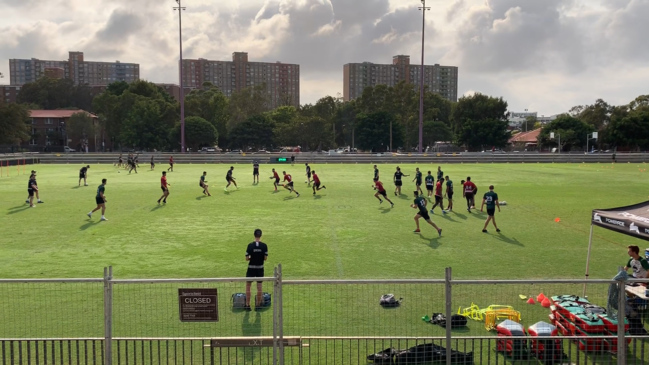 “Everything he’s got there is for him, his kids and his family. That’s Latrell, he loves his family, he loves the outdoors and the bush. He’s put a deposit down now for his [own] farm so I think those conversations really planted a seed for him too.”

The Rabbitohs announced the signing of Latrell on Monday and although he seemed composed when he fronted the media, it was a different story leading up to the announcement.

BRUTAL SLEDGE: Latrell reveals why he snubbed the Tigers

LATRELL IN NEW COLOURS: The first photo of Latrell Mitchell as a Rabbitoh

“That’s the first time I’ve ever seen him real nervous. He was shaking in the back of the car going towards the leagues club, but you could see that he was excited too,” Matt said.

Bennett greeted Latrell at the Leagues Club and his calming influence was a perfect reminder that he made the right decision.

“As soon as he got there and met Wayne Bennett, Wayne just put him at ease because they were just talking about cattle and the farm. He just had this big sigh of relief.

“When it was done we hadn’t seen him smile like that in a long time. It was a big relief. I said to him ‘Are you happy?”. He couldn’t even say anything to me he just had the biggest smile on his face.”

‘He could be injured’: Fury’s trainer says Gypsy King is ‘not 100 per cent’ fit for Wilder fight

Brad Arthur admits Eels were ‘scrappy’ in Souths trial, but they ‘got what they needed’

Could this be the next Socceroos’ star? Bozza says we’re ‘foolish to ignore him’

This guy is quick! Have the Broncos found the NRL’s next Fijian star?